This author has not yet filled in any details.
So far admin has created 40 blog entries. 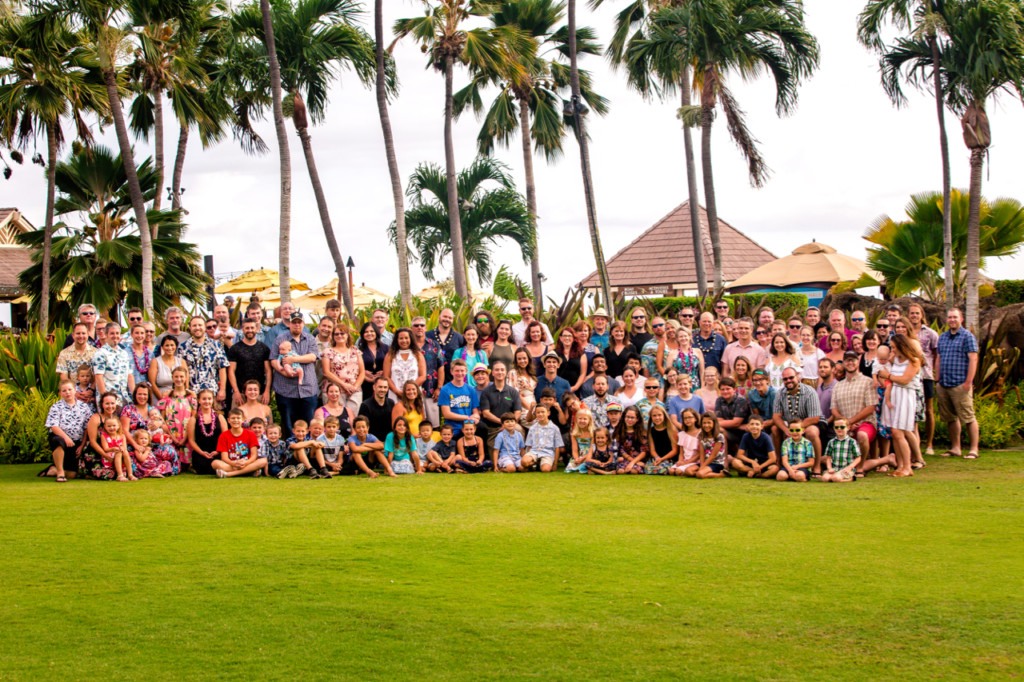 To celebrate Front Porch’s 20th anniversary, we took our entire company, along with family members, to beautiful Maui, Hawaii for a wonderful trip filled with sunshine and fun. We are proud of our award-winning platform, many patents, steady profitability, and industry-leading innovation, but what we most appreciate have been our deep relationships with our partners and customers. Thank you for helping us reach this milestone.

UPDATE: ALL POSITIONS ARE NOW FILLED AS OF JUNE 1.

Front Porch is pleased to announce that we are expanding our staff and have several new positions open.

Take a look at the jobs below and see if you would like to join us.

Meet with Front Porch at MWC

Meet with Front Porch September 12-14, 2017 in San Francisco at the Moscone Center at the premier mobile industry event for the Americas.

Mobile carriers need to reach each mobile device individually with personalized and relevant content. Front Porch provides a solution that delivers graphical and interactive content to each subscriber as they surf the web. Operators engage with each subscriber via network delivery of a web-based application-like experience. Devices do not need any configuration or app installation. Subscribers use this experience to gain easy access to self service care portals. 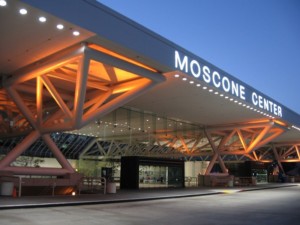 Meet with Front Porch at these early 2017 events.

Front Porch will be exhibiting and sponsoring the following events in the first half of 2017.

If you are attending one of these events, please consider arranging a meeting in advance.

Using Front Porch’s innovative messaging solutions, ISPs can make sure they are doing everything in their power to provide users with the fastest possible Internet experience via DOCSIS 3.0 technology in cable environments or fiber optic service for DSL customers. Front Porch gives providers the ability to deliver a customized in-browser message, targeted only toward accounts with older equipment, and remind account holders of the benefits an upgrade would provide. Customers who have up-to-date equipment are excluded from the message.

“For ISPs, the task of getting millions of customers to swap out equipment is difficult enough as it is,” said Ned Sudduth, vice president of marketing and partnerships for Front Porch. “With Front Porch technology, that process is made easier by giving providers the assurance they are getting in touch with only those customers who would benefit from upgrades. Compared to email messages, direct mail, and phone calls, our technology offers a much more effective and efficient solution.”

Millions of subscribers have already benefitted from this engagement method from Front Porch. It enables ISPs to communicate to different subsets of customers in need of an upgrade and includes a high degree of personalization to the resulting messages.

“Providers often have different target audiences – there may be an audience of subscribers eligible for a free modem upgrade, and an audience of subscribers who pay a monthly fee to rent the modem,” Sudduth added. “Each audience is targeted with a message containing the right wording that matches their exact plan. The browser message is interactive and allows subscribers to opt in to an upgrade and easily schedule a delivery or install date.”

Front Porch is committed to helping ISPs stay ahead of industry-wide technology shifts and meet their goals of enabling faster Internet speeds in the homes of their subscribers. To see why our customers routinely declare our in-browser messaging solution as the most effective tool to communicate to their subscribers, please visit www.frontporch.com.

ISPs Ease the Merger and Acquisition Process with Front Porch

Sonora, California – April 28, 2016 – Front Porch®, the world’s leading provider of innovative subscriber engagement solutions, offers Internet service providers (ISPs) a provable, seamless method to communicate with their customers throughout the entire process of a merger or acquisition with the PorchLight® subscriber engagement platform.

Utilizing this industry-leading proprietary technology, ISPs that use the PorchLight can reach their customers before, during, and after the merger process, with messages that are formatted to every individual device within the household. This ensures both new and existing customers are fully aware of any changes they may experience and any actionable items they must make. This purposeful, managed customer dialogue during the transition eliminates serious revenue leakage.

“The last thing a provider needs during a merger or acquisition is customer unease,” said Dave Salzer, vice president of global sales operations at Front Porch. “With our patented messaging capabilities, ISPs can ensure that every subscriber on their network is well aware of what’s going on, and when called for, we facilitate easily taking any needed steps to maintain their account functionality.”

For customers of an acquired ISP, Front Porch technology is the optimal way to inform them of:

An acquiring ISP can also message unaffected subscribers in order to assure them that nothing about their account or services will be affected in any way, eliminating the reflex to go shopping for a new service provider.

“We’ve always been a customer-centric company, so minimizing subscriber disruption and confusion is a big part of who we are,” Salzer added. “The whole idea is for subscribers to be thrilled about their carrier. Loyalty is a direct result of superior customer experience, and communicating that kind of care is where we spend our time.”

“We’ve been able to implement our messaging platform in a virtual environment for several years now for some of our largest customers,” said Carlos Vazquez, chief technical officer for Front Porch. “We have perfected this particular method of deployment and are already working on expanding it into the networks of more of our clients.”

The benefits of a virtualized PorchLight are numerous. As Front Porch has clients all around the globe, a virtual deployment solution gets the PorchLight’s message delivery platform up and running much faster than using a physical appliance by avoiding shipping delays and customs.

“The cost savings by deploying virtualized appliances can be appealing to service providers as well, as fewer physical devices can translate into reduced energy bills and cooling costs,” Vazquez added.

Front Porch is proud to sponsor the upcoming Wi-Fi Now conference April 19-21 in Washington, D.C., and key executives will be available at the Front Porch booth for meetings. For more information about Front Porch, please visit www.frontporch.com.

Front Porch will be exhibiting in Hall 5 at the 2016 Mobile World Congress.

It is that time of year again.  If you are going to Barcelona for MWC, Please make an appointment or plan to stop by the Front Porch stand in Hall 5 to meet with company executives.    Visitors will learn more about the Front Porch subscriber engagement and communications solutions via multiple demonstration kiosks in the exhibit booth.

Please see the below conference map to find our stand. 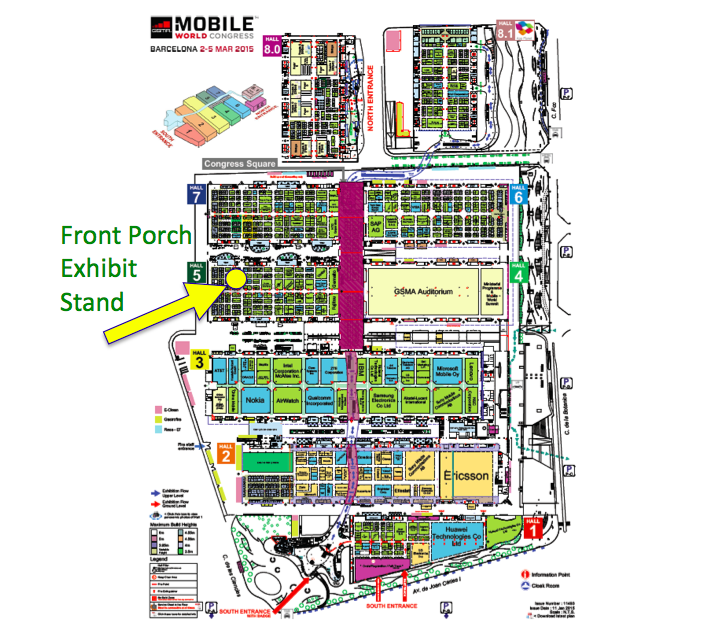 Front Porch is sponsoring and exhibiting at the 2015 Carrier WiFi Americas conference in Dallas Texas November 3 and 4.   Stop by our booth to learn how major carriers are benefiting from our effective marketing and communication solution.

Learn how Next Gen Wi-Fi and Wi-Fi Calling is driving demand for alternative marketing solutions from Front Porch as the captive portal and landing pages are rapidly becoming a thing of the past.

Directions to the Hilton Anatole

Front Porch is pleased to announce that it’s technology contributed to the ecosystem making Passpoint auto-authentication possible during the 2015 Mobile World Congress.

19th February 2015, London, UK: The Wireless Broadband Alliance (WBA), the industry association focused on driving the next generation Wi-Fi experience, and the GSMA today announced that they will deploy Next Generation Hotspot (NGH) and PasspointTM/ Hotspot 2.0 technology on the Wi-Fi network at the GSMA Mobile World Congress 2015 in Barcelona, Spain from 2-5 March. The network, which will also be supported by the Wi-Fi Alliance, will allow attendees using iOS and Android devices that support Passpoint TM/ Hotspot 2.0 of participating mobile operators to automatically roam onto the network using secure credentials and also benefit from a secure Wi-Fi connection.

Meet with Front Porch at the TM Forum Digital Disruption 2014

Front Porch is the creator of a powerful communications platform that empowers network operators to deliver messages — such as product promotions, app discovery, and service notifications — to subscribers’ devices while they surf the web. Front Porch in-browser notification options allow network operators to put any graphical content on any device’s screen and control the presentation effects and timing of delivery as users surf anywhere on the Internet. Some network operators deliver transparent watermarks of their logo in the bottom right corner of the browser. Others deliver a interactive toolbar across the bottom of the screen with multiple functions and messages.